Delaware State Police have announced the arrest of a Sussex County man on his 6th offense of driving under the influence after a brief chase and police stop on Sunday evening. 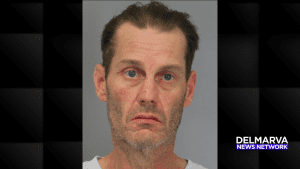 Troopers say a concerned citizen called in 47-year-old James H. Comegys Jr. of Millsboro after he was seen “swerving all over the roadway.” When Troopers attempted to make contact with his white Ford Fusion sedan on northbound Sussex Highway (Route 13) in Laurel, he evaded circling a Popeye’s restaurant before coming to a stop. Once stopped, Troopers observed signs that Comegys was under the influence and launched a DUI investigation. Inside the vehicle, Troopers located drug paraphernalia and nearly a quarter gram of heroin.

Comegys was taken into custody and charged with his sixth DUI offense, unlawful to Tamper, or circumvent the operation of, any Ignition Interlock Device, Possession of a Controlled or Counterfeit Substance and two counts of Possession of Drug Paraphernalia. Comegys was arraigned and committed to Sussex Correctional Institution on 23,200 dollars cash only bond.