Delmarva fox squirrels are about to get a population boost in Delaware with a new round of translocations planned for later this month, a project of the Delaware Department of Natural Resources and Environmental Control and its state and federal partners. Although this charismatic squirrel was once a federally-listed endangered species, translocations, habitat management and land protection have helped regional Delmarva fox squirrel populations to recover, resulting in the species being removed from the federal endangered species list in 2015. 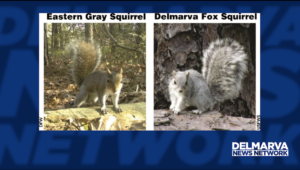 Delmarva fox squirrels are now abundant on the Eastern Shore of Maryland, but these large, silver-gray squirrels remain rare in Delaware, with only two known populations in the state. Unlike many of its squirrel relatives, the Delmarva fox squirrel is very slow to expand its range and colonize new territories. To help speed the return of this species to more locations in Delaware, the DNREC Division of Fish and Wildlife is planning to translocate squirrels from robust populations in Maryland to unoccupied suitable habitats in southern Delaware.

In 2014, the Division developed a Delmarva Fox Squirrel Conservation Plan in collaboration with stakeholders, to increase the number of Delmarva fox squirrels in Delaware. After monitoring and researching the feasibility and methods for reintroduction, the plan is now being implemented. Squirrels captured from Dorchester County, Md., will be released into the Assawoman Wildlife Area in southeastern Sussex County starting in mid-September 2020.

Translocations have proven to be an important and effective tool for increasing the distribution of this species and are the cornerstone of the Delmarva Fox Squirrel Conservation Plan. Since they are no longer a federally-listed endangered species, landowners should not be concerned if they start seeing Delmarva fox squirrels on their property. Hunting of Delmarva fox squirrels is prohibited, so it is important that hunters note the differences between them and the more commonly seen eastern gray squirrels, for which Delaware has a hunting season.