Delmarva News Network has a traffic alert for our audience in Salisbury. An accident around 1:12 p.m. on Tuesday afternoon near the intersection of North Salisbury Boulevard (Route 13) and Pine Way has resulted in damages to vehicles and an electric pole. 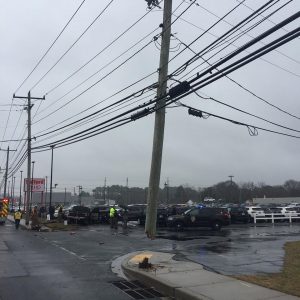 It was initially reported the crash happened at the intersection of Salisbury Blvd and Columbia Road. Salisbury Fire Department officials later clarified it happened off Route 13 at a car lot occupied by Safford Chrysler-Dodge-Jeep-Ram of Salisbury. A motor vehicle struck an electric pole, damaging power lines and collided with 5 new Jeeps.

Officials reported power outages in the area, although Delmarva Power says there are no outages at this time. Stay with Delmarva News Network for further developments at the come in to our traffic center.